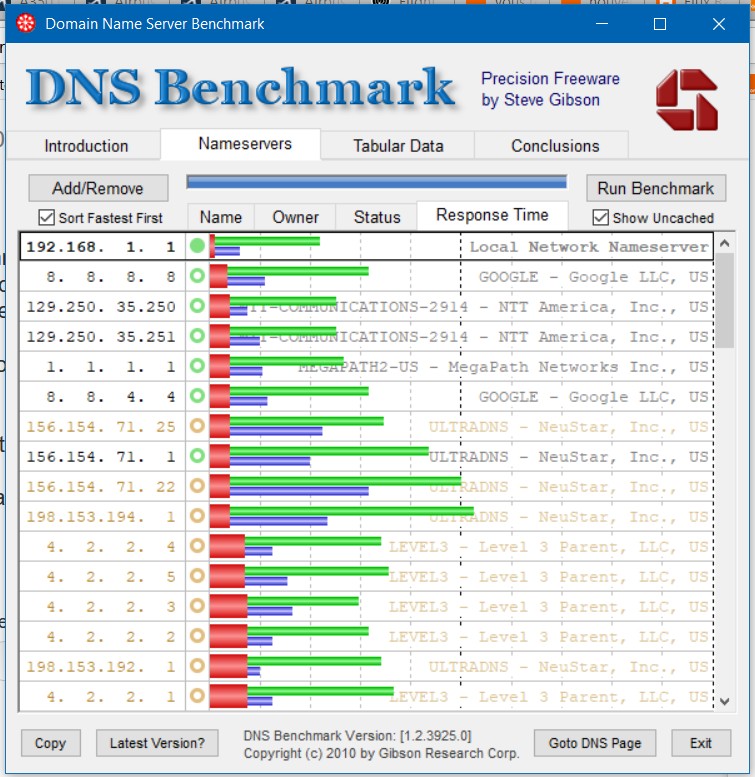 What the results you have just obtained mean to YOU

The results summary, conclusions, and recommendations from your most recent run of this DNS benchmark are provided below. Please carefully consider the implications of making any changes to your system's current configuration before doing so.


ý System has only ONE (router based) nameserver configured.
It appears that only one local (router gateway) DNS nameserver, with the IP address of [192.168.1.1], is currently providing all DNS name resolution services to this system. This configuration is not recommended because most consumer-grade routers provide inefficient and under-powered DNS resolution services.

Unless the DNS resolvers your router is using is under your control, it may not be providing the best or complete name resolution services. For example, is it using multiple redundant DNS nameservers?

Users of GRC's DNS Spoofability system have determined that consumer-grade routers can be crashed by the receipt of specific DNS reply packets from the Internet. This opens the possibility that Internet-based criminals could acquire access to your router from the Internet as well as to the private network in controls.

Many consumer-grade routers fail to provide the full range of DNS lookup services. This may have been detected by the benchmark and noted below.

Unless you have some specific reason not to, you should give serious thought to disabling your router's provisioning of DNS services (which it is providing for all computers on your local network). After this is done, a fresh reboot of your computers will likely reveal the multiple DNS nameservers provided by your ISP. This is a superior configuration, without an under-powered router acting as a incompetent middleman and impeding all DNS access.

Note that if you can determine the IP addresses of your ISP-provided nameservers (which may be visible in your router's web configuration) you could manually add them to the nameservers being tested by this benchmark, while also leaving your router providing DNS. This would allow you to compare the performance when running through your router versus "going direct".


þ System nameserver is faster than ALL public alternatives.
The DNS resolver your system is using is responding faster than any of the 100% reliable publicly available alternative DNS nameservers this benchmark utility just tested. Therefore, there would be no performance benefit from switching to any of those publicly available nameservers. However, since you only have a single system nameserver configured, it might be useful to use some of the fastest public nameservers as backups if that's possible in your situation. Please also note that this best performance appraisal assumes that this system's nameserver is 100% reliable. See the next item below for an appraisal of your nameserver's reliability.

Note: If there appeared to be one or more faster public alternative nameservers, there was enough uncertainty created by the spread of benchmark timing results that it was not possible to be at least 95% confident that any of those faster seeming nameservers really were reliably faster than the nameserver this system is currently using. So it made no sense to alarm you about the need to change things when there was insufficient evidence.


þ This system's nameserver is 100% reliable.
DNS reliability is extremely important, since lookup requests that are dropped and ignored by nameservers cause significant delays in Internet access while the querying system waits for a reply. The system is then finally forced to reissue the query to the same or to backup nameservers. While your system is patiently waiting for a reply, you are impatiently waiting to get on with your Internet access.

During this benchmark test, the system's nameserver tested returned a reply for every request sent. It doesn't get any better than that. Very nice.


þ This system nameserver returns errors.
This is a GOOD thing!  Some DNS providers, such as OpenDNS and even the Earthlink, Roadrunner and Comcast ISPs, redirect incorrectly entered URLs to their own advertising-laden marketing-driven interception page instead of simply returning an error to the web browser. But this system's nameserver is returning errors when asked to lookup non-existent domain names.


þ System nameserver is replying to all query types.
During the development of this DNS Benchmark we discovered that the routers used by some pre-release testers were not returning results for the benchmark's Uncached and/or Dotcom testing queries. Even though these queries are admittedly unusual, they are completely valid. So the only conclusion was that those few routers were inherently defective. The good news here is that your nameserver is replying to these unusual but valid queries.

REMEMBER TO CHECK SPOOFABILITY !!
Whether you make any changes to your nameservers or not, but
especially if you do, be sure to verify the security of your final DNS
resolver set by using GRC's free "DNS Spoofability" testing service!

If you require assistance with the implementation any of the suggested changes to your system's DNS configuration, several sources of help are available:

For help with any of the specific conclusions or recommendations above, please see the DNS Benchmark FAQ (Frequently Asked Questions) page:

Knowledge of the DNS domain name system is widespread among those in public technical Internet forums. You will very likely be able to obtain answers to any specific questions you may have by asking knowledgeable inhabitants of online communities.

GRC maintains and operates a comprehensive online "newsgroup" community and has a specific newsgroup - grc.dns - dedicated to the discussion of DNS issues including this DNS benchmark program (where it was developed) and GRC's online DNS Spoofability testing service. Please see the following web page for help with joining and participating in GRC's terrific newsgroups:

GRC's technical support services are limited to the support of licensees of our commercial software products and do not extend to the support of our freely available software or online services. Please do not write to us (GRC / Gibson Research Corporation) for assistance in connection with this freeware utility.

You will find that ample help is freely available
within the Internet community.  Thank you!

Please Note: This program is Copyright (c) 2010 by Gibson Research Corporation -- ALL RIGHTS RESERVED. This program is FREEWARE. Although it may not be altered in any way, it MAY BE FREELY COPIED AND DISTRIBUTED onto and through any and all computer media in ANY form or fashion. You are hereby granted the right to do so.
• • • 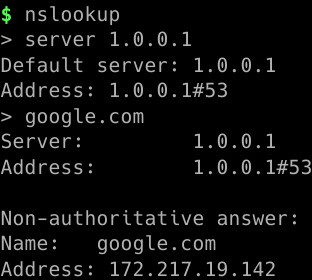